Katie Dunneback has her fingers in lots of pies. Her mother is glad
it’s no longer the butter. Professionally, she currently is working
for a state agency providing consulting services to libraries.
Personally, she has been cooking and baking since she was a small kid,
knitting for almost five years, and took up scrapbooking a few months
ago. Online, she spends most of her time on Twitter as younglibrarian,
and blogging a mix of professional and personal topics at “Make of It
What You Will“

I wish you could all smell what I’m smelling. Namely, the scent of
spiced roasting meat. There is no other way to describe it but
gorgeous. This is a recipe that I’ve developed over the last two years,
picking bits from here and there. I really enjoy experimenting in the
kitchen and I encourage you to use this as a jumping off point for your
own experimentations!

I’m warning you now that this recipe is time intensive, but it is
so, so, *so* worth it. The most time intensive bit of this recipe is
also the most crucial in mine, and my mom’s, opinions. Yes, my mother
has tested this recipe and given it her seal of approval. Moving on.
The brine. This recipe is pretty much all about the brine. It’s also
the bit that took me longest to get correct. But first, the things you
should make sure you have on hand prior to attempting the recipe (other
than the ingredients):

Okay, you’ve got all of that. We’re on to the brine. Since this is a
piece of pork we’ll be roasting, I started playing around with sweet
and savory tones that are known to work well with pork. Salt is a given
in any brine, but with all of the choices of salt out there, I just go
with kosher. It’s pretty much the workhorse salt of the kitchen in
my and all the chefs and cooks I’ve watched on Food Network over the
years opinions. For the truly sweet, I went with a mixture of apple
juice, brown sugar and molasses. The sweet aromatics are whole cloves
and cinnamon sticks. And the savory is cracked or crushed black pepper,
half a head of peeled and cracked garlic (yes, I like my garlic, but
the taste is pretty darn subtle), ground mustard (if you can get your
hands on some Colman’s, I totally recommend it), and my “secret”
ingredient: ground cumin. I don’t know what it is about cumin, but I
add a bit of it to all of my spice mixtures and they just taste even
more yummy than before (I also found out at Trivia Night last week it
is the second most popular spice in the world behind pepper). Put all
of that and the water into the saucepan before turning on the burner. 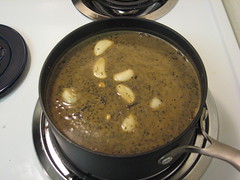 Bring it to a rolling boil, stirring occasionally in the beginning
to make sure the salt, brown sugar and molasses have dissolved and
incorporated. 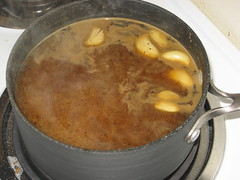 After you’ve got it at a rolling boil, let it go for about five
minutes to really steep the aromatics. Then, take it off the heat and let it
cool down completely. If you’re in a good winter location with a place
to stick food/drink outside to cool without much interference from the
local critters (a cookie sheet topped by a kitchen towel topped by a
good sized rock does wonders for this issue, and is also how I chill
Angie’s cracker candy recipe), place the saucepan out there on a
cooling rack to let the air completely circulate around it. I usually
also stick a piece of saran wrap on top of the saucepan before putting
the cookie sheet on it.

Once the brine has completely cooled, you need to set up for getting
everything into the plastic bag. I like to have the bag set up and open
with the brine nearby before I even open the butcher’s wrapping on the
roast. Using those nice sturdy tongs you have on hand, move the roast
from the butcher wrapping and into the plastic bag, doing your best to
avoid contact between the roast and the outside of the bag. We’re all
about food saftey here, right? Next, pour the brine into the bag. Now,
this is why I like the zip closing mechanism on the plastic bags I use.
I close the zip top almost all the way, squeeze all of the air out of
the bag, to the point where the brine is *just* about ready to squirt
back out on me, and then close the zip completely. Refrigerate at least
8 hours, preferably overnight. 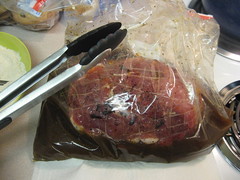 Now that you’ve let the roast absorb the yummy flavors overnight,
it’s time to put the finishing touch on it before popping it into the slow
cooker. It is time to brown this sucker. Browning meat helps to seal in
flavors. I prefer to add an extra oomph to the meat by coating the
roast in seasoned flour before subjecting it to this step. 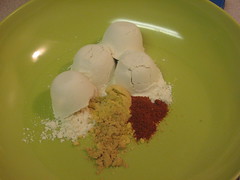 This is will save your sanity later: LEAVE THE BUTCHER TIES ON
THE MEAT. Believe me, you will be sorry if you cut them off before the roast is completely done cooking.
The ties are meant to survive browning and cooking without impacting the roast. 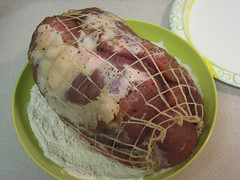 You can go a little browner on the crust, but try for at least this level of coloration around the entire roast: 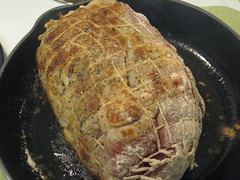 The roast is now ready for the main event: 8 to 10 hours soaking in the slow cooker. 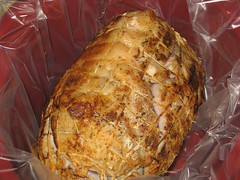 Like Sarah, I believe the slow cooker liner is a crucial kitchen tool. Clean-up is beyond easy if you use them. Use them. To add
that last layer of flavor, I mix a half cup of apple juice, three large-ish cloves of garlic and enough water to go 1/2 to 3/4 of the way up the roast. 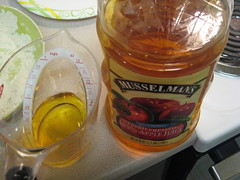 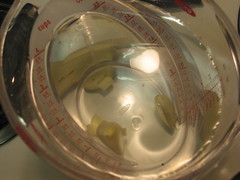 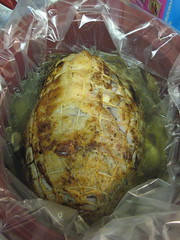 A lesson that sometimes needs reinforcing (I can be a little
dense at times): the smaller your roast, the less time it needs to
cook. This is where a meat thermometer really comes in handy. Pork is
considered fully cooked at 160 degrees Fahrenheit. It’s recommended by
some, so as not to overcook it, to pull it about 5 degrees below and
let it sit for 15 minutes as it will continue cooking those last 5
degrees. I use a 9×13″ glass Pyrex pan for my shredding, so I let the
roast sit in there for those 15 minutes.

Now is the time to remove the butcher ties (I feel a little like
Dieter saying that). Depending on the type of ties your butcher uses (mine
does a webbing that I like), you may find bits of your pork sticking to
it as you remove it. This is fine. All you need to do is pick it
off…and eat it. It will be hot, though. The following pictures are from a time before I browned because I
stopped taking pictures for some reason after the last one, but you’ll get the idea. 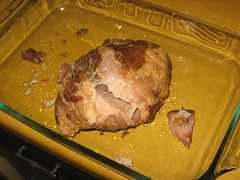 Once you’ve removed the ties, you can shred. I recommend following the grain of the meat. 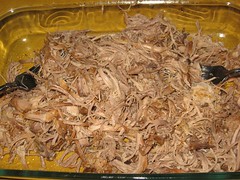 With that, you’re all done but for the eating! Enjoy! 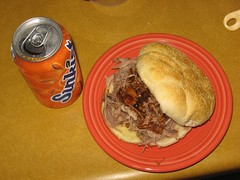 Place browned pork shoulder in slow cooker, aka CrockPot, fatty side
up. Pour in water/juice/garlic mixture until about halfway up the
roast. Cook on low for 8-10 hours.