2012 update: Thanks to the power of Twitter and a recommendation from Mary Ann Vadnais, this recipe now has a gluten-free option. To make gluten free, substitute the saltine crackers with Yehuda Matzo Style Squares. I’ve been told since from several people who tried this, that it worked very, very well!

2011 note: I originally posted this recipe nearly 2 years ago in 2009. It’s probably the single most popular post on this website, and I still get people asking me about this recipe, sharing the link and talking about making the cracker candy. It’s just that easy to make and just that good. So I decided to pull it back to the top for all of you who never saw it the first time. In the comments are discussions for variations, and I’ve tried them all, including the club crackers, adding crushed candy canes, etc. Honestly, my favorite cracker candy is still the kind that’s just the saltines and chocolate, not even any nuts on top. But this is a forgiving recipe, so experiment and find your own favorite way!

I think most of you are going “uh…what?”. I had never heard of cracker candy until about 3 or 4 years ago, when we did our first cookie exchange for our playgroup. My friend Jennifer did this for the exchange and I fell so madly in love with it. It’s probably just about the easiest Christmas cookie you can make (it took me twice as long to write this post as it did to make the actual candy) and super tasty.I have, in the past, made these and sent them to people who think I’m crazy when I talk about them. But the combination of the salty cracker and the butter/sugar that turns into a toffee, with the sweetness of the chocolate is so addictive! Here’s how to do it, complete with (bad) photos.

Spread out your crackers in on a jelly roll/cookie sheet pan. One with edges that you’ve lined completely with foil. Trust me on this, line the pan with foil. I decided to do a mix of soda crackers and club crackers, because I thought the buttery taste of the club crackers might be divine in this recipe. 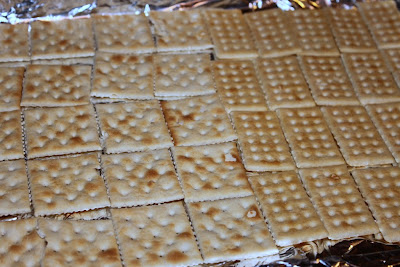 Melt the butter, add the sugar and bring to a boil for at least three minutes. It may take a bit longer, but you’ll see it thicken and get a bit more gooey. I think there’s an official candy-making term for this. Soft ball stage? I don’t know, I’m totally making crap up now.

Warning!! Do NOT walk away from your pot. You must stand and stir the entire time or you’ll end up with a huge mess on your stove and probably burnt butter and sugar. 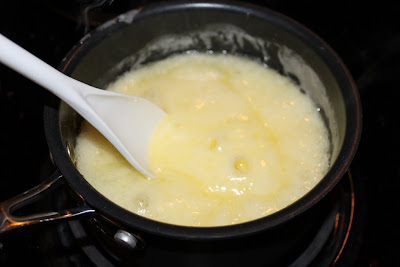 Pour the butter mixture over the crackers. All over the crackers. You won’t be able to get them all coated just by pouring, you’re going to have to pour it as evenly as you can (I didn’t do that and made it a little harder on myself) and then go back and spread it out with a spoon. 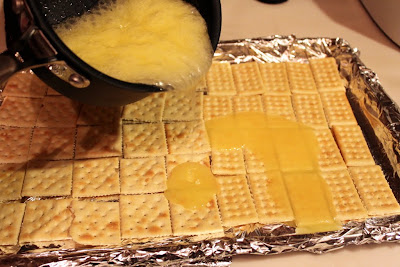 It should look like this, all cracker surfaces covered with butter goo. Now put the crackers in the oven on 400 degrees for 5 minutes. Set a timer. You’ll be ticked if you leave them in too long and burn them. And that can happen. 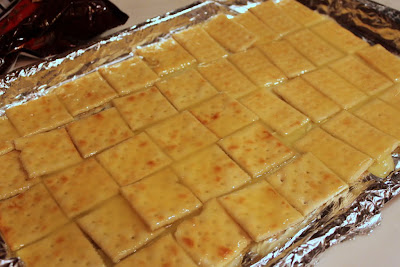 While your crackers are in the oven, grab your commercial-size can of cashews–what do you mean you don’t have one? Everyone has one, right? Well, anyway, at this stage, if you’re going to use nuts like pecans, walnuts or cashews, even peanuts, you’re going to want to chop them up. 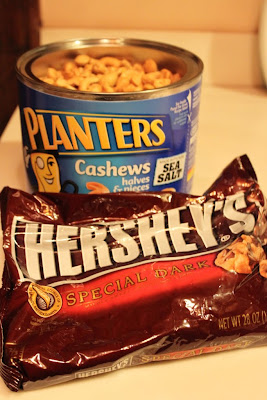 Like this. I used my handy countertop Black and Decker chopper. You’ll see this featured a lot in my cooking posts. I just chopped the cashews until they were appropriate for topping. I use cashews because I like them best, but you can use whatever you want. A cup of cashews unchopped resulted in enough chopped cashews for the entire pan of cracker candy. 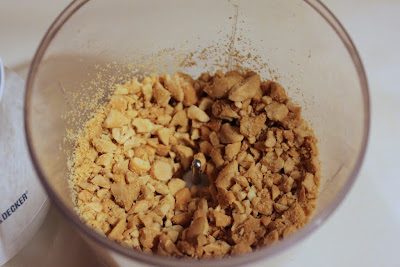 Here’s a shot of the crackers in the oven. This was longer than five minutes because I had to run upstairs and tuck Brianna in. 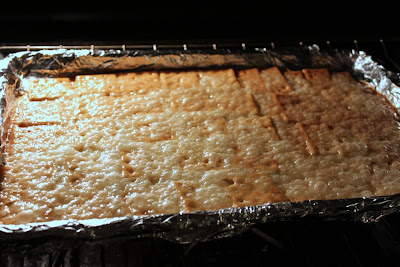 I pulled them out of the oven, see how they look kind of brown? That’s not bad, but you don’t really want them to get any darker than that. Don’t try to go for any particular color. Just bake them for five minutes and pull them out. 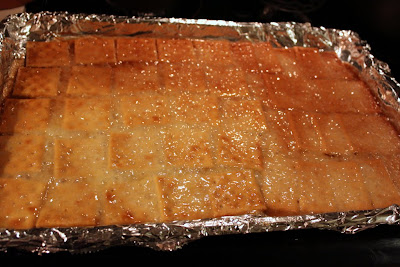 Now sprinkle the chocolate chips over as soon as you pull them from the oven. I also had an industrial size bag of dark chocolate chips (hey, I shop at Sam’s Club) so I had to guess at how many to put on, but it’s hard to have too much chocolate. I use dark because it’s my favorite. The chips will begin to melt immediately, but get them sprinkled on and then worry about spreading. You have lots of time. I spread one side out, the other side looks like they’re still formed but really they’re melted too. Spread the chocolate evenly. I had to move some around because I had a bare spot after I was done. 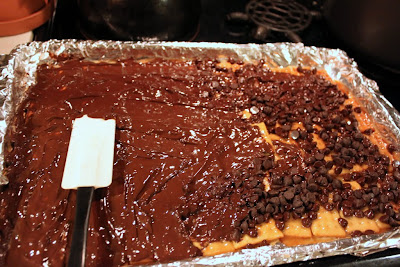 Look to see if anyone is around. 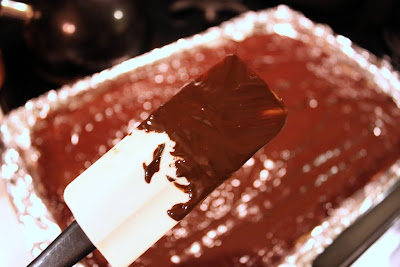 Lick the spatula. You’re done with it, it’s okay. Now put it in the sink and wipe the chocolate off the corner of your mouth. Be glad no one saw you. 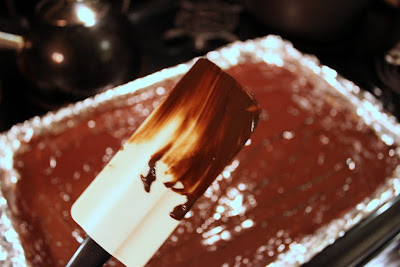 At this point, you can just leave your cracker candy naked. You don’t have to do anything more to it if you don’t want. You can be done now. 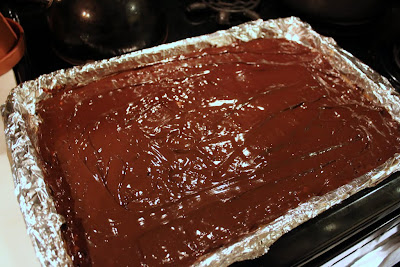 I added cashews to only half, because I do like naked cracker candy too. Instead of adding nuts, this year Jennifer added Christmas color candy sprinkles to hers. I almost put some fancy sea salt on one corner of this, because dark chocolate and sea salt? Yum. But I didn’t want to get the salt out (I’m lazy). 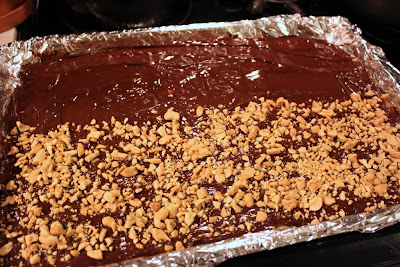 Now the hard part. Waiting. Let it cool in the fridge or freezer. Possibly overnight on the counter if it’s cool in your house, but you might need to stash it in the freezer for a few minutes to firm it up. You don’t want the chocolate to be soft at all. You want it totally set. Now break it apart. You can be anal and break it into the cracker squares, or you can just break it into random pieces. It really doesn’t matter. It all tastes the same. Addictive. Oh, and next time? I’m making them all with club crackers. The extra buttery taste made them insane! 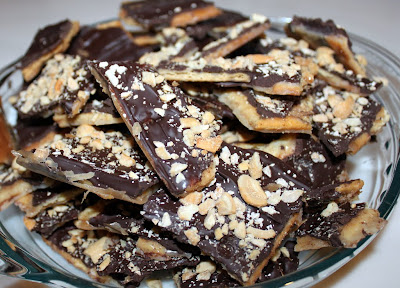 35-40 Saltines
2 sticks of salted butter -do NOT use margarine
1/4 cup sugar (I use white but some people use brown. Your call!)
1 bag of milk (or semi or dark) chocolate morsels
Sliced almonds or any other nuts

Line cookie sheet with foil (sides too). Lay saltines side by side in one layer, sides touching. Melt butter, add sugar and boil 3 minutes. Drizzle over crackers, (keep crackers together). Bake 5 minutes @ 400A?. Remove from oven and sprinkle chocolate over baked crackers. They will start to melt – spread over crackers. Sprinkle top with nuts. Refrigerate until cold, even overnight. Break into pieces.