Last month, I was fortunate to be able to attend the Surrey International Writers’ Conference, in Surrey, British Columbia, Canada. I’ve been hoping for years to get the opportunity to attend, and I was thrilled when they invited me for 2019. 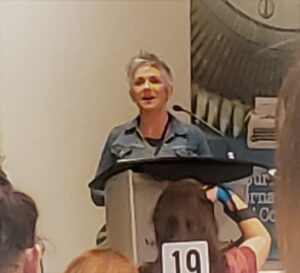 Denise Mina during her keynote

I’ve attended hundreds of conferences over my time in publishing, and I can say with 100% confidence that SiWC is one of the best conferences a writer can attend. The quality of the speakers and the workshops/panels offered are of the absolute highest standard, and the wealth and breadth of information and opportunities was incredible. Not only that, but the keynote speeches were among the most impactful keynotes I’ve ever experienced. I took my 15 yo daughter with me, and though she has minimal interest in writing or publishing, she went away from each keynote speech saying things like, “Wow, that was amazing.” or “That was the best speech I’ve ever seen, I loved it.” The keynote speakers, who included Sonali Dev, Denise Mina, Nicole Blades, Delilah S. Dawson and others brought new perspectives, introspection, heartfelt encouragement and illuminating (and sometimes hysterical) stories and personal anecdotes. I thought just the keynotes alone brought the value of the price of admission. 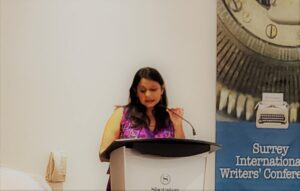 Sonali Dev during her keynote.

Since I’m not an acquiring editor, instead of pitch appointments, I did ten minute consultation appointments. Many people didn’t know who I was but took the opportunity to just talk to an editor, and walked away, I think, having gotten valuable insight into what they were asking. Some people did use it as practice pitch—and I gave feedback on their pitches, with information on how to carry that feedback into query letters. And sometimes, it turned into feedback on the book itself (for instance: if you can’t name the hook, is it possible you need to do more work before you query?) But some people had career or other writing advice they needed. I answered a lot of questions about breaking into nonfiction writing—nonfiction isn’t my area of expertise, and I said that up front, but I have worked adjacent to it for enough years to understand what’s needed in a proposal, a platform and the work involved. I got a lot of people started thinking about next steps they needed in their careers, how to think differently about things, and gave information and advice on moving forward. I think people got a lot of value out of those ten minutes! 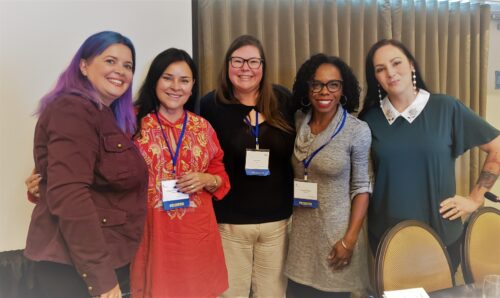 The panels and workshops offered were, as mentioned, of the highest quality. I wish I had had more time to attend some of what was offered, because there’s always value to be found in learning about writing and publishing from others! But, in this case, I was only able to attend one, but I did moderate a fantastic panel on voice. The panelists were Diana Gabaldon, Nicole Blades, Liza Palmer and Delilah S. Dawson. My goal as a panel moderator is always to make sure all of the panelists have an opportunity to speak and share their viewpoints, while also giving the audience as much value as possible. That value, in my mind as a moderator, should include some key takeaways as well as, in the case of something like voice, some suggested action steps or things audience members can use prescriptively in their own craft/writing. I’m not going to detail the panel here because I took notes while I was moderating and asking questions and I’m going to write up some of that advice and takeaways for you in another post! Let me just say the panelists were smart, they were funny and they gave all the value attendees could hope for. I was so fortunate to have moderated these panelists! (PS, Diana Gabaldon is amazing!) 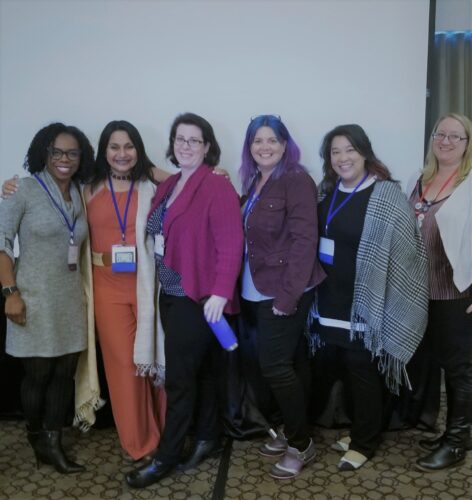 I also sat on a panel about romance with Laura Bradford (literary agent), Sonali Dev (author), Nicole Blades (author) and Piper J. Drake (author), moderated by CJ Hunt. Our poor moderator—I think she got to ask us just a few questions and then, between us and the audience, we ran a bit amuck talking about romcoms, trade paperbacks, whose story is it to tell, and more. Being on a panel with so many other smart women meant that I could mostly sit back and listen in awe as they gave insight and information into the current state of the market. I would like to sit on panels like that all the time! 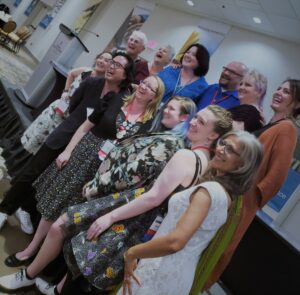 The SiWC board. Hardworking and amazing!

I think all of what I’ve described might sound very “conference normal” so you might be wondering, “But, Angela, what makes this conference so special?” and though I probably will never be able to capture how valuable all of the keynotes and offered experiences at the conference were—well above what you see at a “normal” conference, I think the one thing I haven’t said, that makes this conference so special, that was the absolute best part of the conference, was the overall tone, vibe and feel of the conference. The dedicated and hard-working conference organizers put a lot of time and effort into vetting the invited panelists, speakers, agents and editors. They’re looking for people who—in my words, no one else’s—can check their ego at the door. They want the presenters to be approachable and willing to talk to anyone and everyone who approaches them. The conference works to be one of sharing, giving, inclusion and a meeting of similar minds. 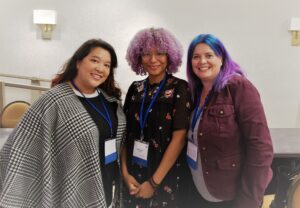 Attendees are meant to feel as if they’re all in it together—on a level playing field, so to speak, even when the accomplishments are different. Presenters who can come in and feel comfortable with the relaxed vibe, don’t expect anyone to cater to their ego, don’t act as if they’re better than, but just relax and go with it, those are the presenters, along with the very-organized, wonderful, caring board members—who allow the conference to have a feeling of camaraderie that’s rarely found at a conference of its size.

So, in short, I had an amazing time at the conference—and I didn’t even mention the Washington Capitals hockey game Bri and I got to see or the sightseeing we did in Vancouver.

Surrey International Writers’ Conference is a conference that knows how to do it right, giving value, meaningful interactions, and an opportunity for learning at all levels. If you have the opportunity to attend, whether as a presenter or as an attendee, I highly recommend you grab it and go. It’s worth every bit of jet lag I experienced!

My daughter, Bri, and I at the Washington Capitals hockey game holding a sign we made and brought with us!